Solidarity Fund > News > Ukraine > “Today we’re on the first page in Google”. How the Ukrainian media handled the corona-crisis 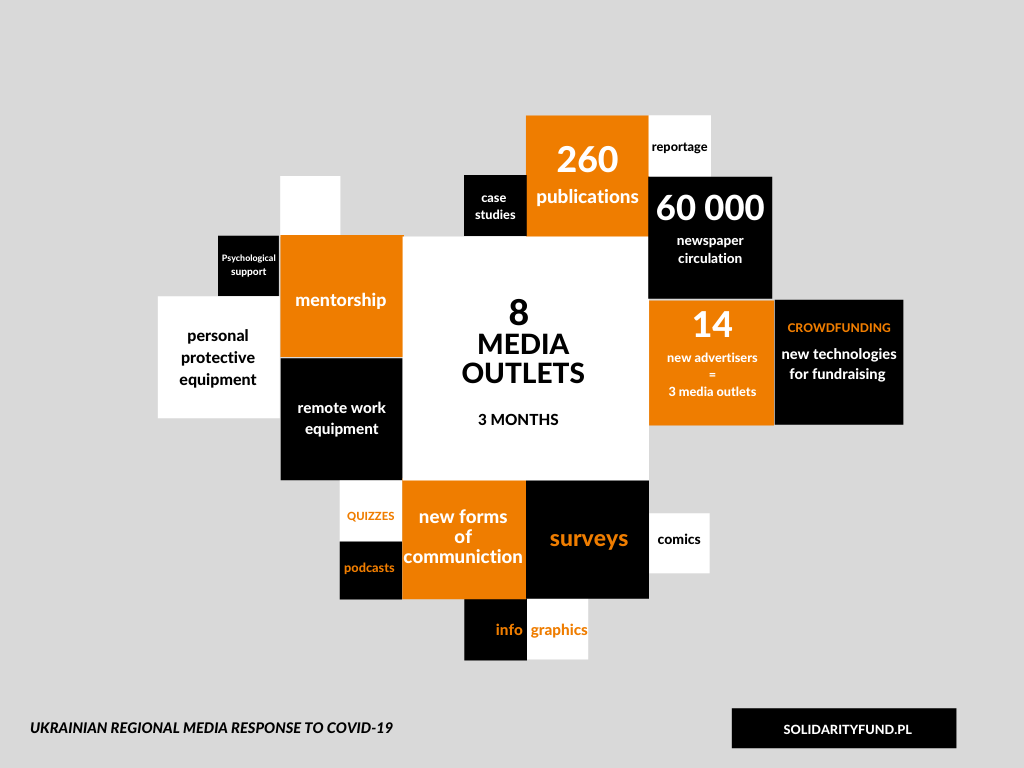 The COVID-19 pandemic has driven journalists to apathy, forced editors-in-chief to send their employees on unpaid leave, and decimated the ranks of editorial teams. However, the crisis may also become an impulse for development. This is exactly the way our partners from local Ukrainian media outlets decided to tackle the pandemic. They had the courage to introduce changes, master new technologies, and modernise their current business models. “What did we have to lose? We took our chances and won”, they say.

For the editorial office of the Slobidsky Krai newspaper, 2020 started with a bang. Advertisers came flocking, attracted by high quality content and reliable analyses, while officials at hromadas (local administration units) kept the waiting rooms of their Kharkiv offices well stocked with fresh editions of the paper. “In March everything came to a screeching halt. Our contracts and plans got scrapped, while the advertisers—who were meant to provide financial resources for the functioning of the editorial office and the development of the paper—held their breath waiting for what the future would bring”, says Larysa Hnatchenko, the long-standing editor-in-chief of the newspaper and the website.

In March, when the virus forced numerous industries to send countless workers on unpaid leave and local news giants, such as “Ukrainskoe Vremia”, tumbled, it left Larysa feeling utterly powerless. “I succumbed to torpor and dejection, which is quite unusual for me. I believe my co-workers felt the same: the paper’s revenues plummeted by 70% within a month and the owner froze our salaries. When I came round a bit, I promised myself not to let anyone go, cut salaries, or reduce working hours. I calculated that I had enough money to keep paying salaries up until June. I had to reach into my own pocket, just to make sure my team wouldn’t starve. The state offered us no support at all”, recalls Larysa.
And the media was , indeed, desperately needing assistance. Access to reliable journalism, especially in the time of crisis, is of vital importance to public interest. The USAID Internews Media Consumption Survey 2020, published in August last year, confirms that disinformation on coronavirus is rife on social media which, in turn, continues to grow as a supplier of daily news. The study revealed that:

Such findings make it clear that there is an urgent and ever-growing need for reliable information. Still, the loss of advertisers not only made it impossible to respond to this demand, but also prohibited editorial offices from satisfying their basic financial needs. Velyki Lug, a radio broadcaster from Zaporizhia that suffered a 90% drop in advertising revenues, had to let go of all but three members of their editorial team. Given the circumstances, most media outlets chose to merely grit their teeth and fight for survival.

Taking these factors into consideration, Solidarity Fund PL put forward a project aimed at providing regional media outlets with a cash injection that would enable them to keep their heads above water during the crisis and motivate them to introduce changes in order to make them more resilient to similar situations in the future.
The project titled “Regional Media Response to COVID-19” involved eight Ukrainian media outlets with whom the Fund had collaborated on earlier occasions. They included:

“We wanted to reach out to those media outlets that, upon receiving our support, would substantially increase the quality of information on the coronavirus and the socio-economic phenomena triggered by the pandemic. A secondary goal of the project was to stimulate editorial teams to change their business models and overcome the natural tendency to freeze investments when focusing on survival. Our joint efforts were aimed at hammering out solutions that would allow them to harness the crisis as a catalyst for change , thus equipping the organisations to better handle similar crises in the future”, explains Anna Radecka, the project coordinator.
Individual mentoring offered to six editorial teams stood out as a prominent feature of the project.
The results surpassed the expectations of the participants—not only did the editorial teams survive the initial impact of the pandemic, but they also managed to improve the quality of supplied information and attract new audiences. They used the crisis as an opportunity to take bold steps and learn how to navigate the world of new media, such as Google, Facebook and Instagram.

Learning from the best

Mentors (i.e. local experts, highly specialised in media- and market-related issues) supported editorial teams in forging new business models. The editors would pick areas they considered to be both beyond their field of expertise and in the most dire need of restructuring. “Meanwhile”, Fund workers explain, “we would match them up with the most appropriate experts.” As Erik Bryndza, editor-in-chief of Velyki Lug radio, points out, the mentor helped the team to develop fund-raising techniques. Now, the editorial team members meet several times per month to discuss new ideas for competitions and prepare professional applications for sending to sponsors, in line with the guidelines received from the expert. Velyki Lug saw the return of some 60% of advertisers from the period before the pandemic and even attracted seven new ones. Also, the journalists were recalled from unpaid leave . Moreover, the editorial team carried out an audit of the website that led to the introduction of changes which resulted in a significant growth of the number of views and users. The purchase of new microphones and a video camera enabled the journalists to create attractive content for their audience.
The experts have also helped to boost the skills of website editors. “Our mentor showed us the modern, specialised analytical tools offered by Facebook, Telegram and Instagram. He explained how to make quizzes and how to coordinate our works” explains Larysa Hnatchenko of Slobidsky Krai. “He taught us how to fully benefit from Facebook’s solutions and showed us in which areas we lacked efficiency. We owe it to him that we’re still on the first page of Google”, Larysa admits.

Crisis as the springboard to success

Supported with experts’ guidance, new skills, and equipment secured through the Fund’s project, the editorial teams created new forms of delivering articles. Velyki Lug radio developed a thematic section on its webpage. The so-called ‘Long Reads’ section is designed to offer longer and more in-depth articles in a clear and attractive manner. “This unique content and shape draws readers and advertisers. It remains crucial to actively seek them out and to know what to offer them. Two years ago, some 90% of our revenues were generated by the paper edition. Today the ratio is different: the website brings in up to 30%. The impact of Facebook has also grown”, explains Erik.
Meanwhile, the Slobidsky Krai paper invested in podcasts that are gaining popularity all over the world. When presenting important yet rather tedious news it uses quizzes and games. What are the readers’ interests? Erik recalls that during the first months of the pandemic, the stories to gain most popularity were the ones that covered the work of the police and business people, a director of a marketplace and the municipal transport authority. In total, in over two months, Velyki Lug produced 11 radio shows and 11 stories for their webpage. As Erik notes, without the support of the Fund, it would be possible to reach just a quarter of this result.

After the March breakdown, Larysa regained her composure and the editorial team got back on track. Her organisation opted to develop its webpage and used the time during the pandemic to improve their journalistic skills and boost team performance. The outcomes seem to promise a brighter future. “In 2020 we concluded advertising agreements with seven hromadas. This year we haven’t signed anything yet, but we’re negotiating, and if things work out, we’ll secure contracts until 2023. People know that our materials are high quality, modern, and diverse”, she adds proudly. “Our second route is grant-based activities. We’re quite good at it. I think our projects will interest the donors.”
“It’s extremely gratifying to see that the editorial teams who took part in our project show commitment and determination to carry on growing. Without a doubt, the current situation has awakened the motivation in our partners to seek new ways of responding when faced with crisis situations. The programme allowed editorial offices to overcome the crisis, increase their revenues, and substantially improve their modus operandi,” Solidarity Fund PL workers conclude.

“Regional Media Response to COVID-19” project was implemented by Solidarity Fund PL from 1 May to 30 September 2020. The cost of the project amounted to PLN 462,828.10. The project was financed under the Free Media Programme.
Fund’s activities within the project were supervised by Ms Anna Radecka.