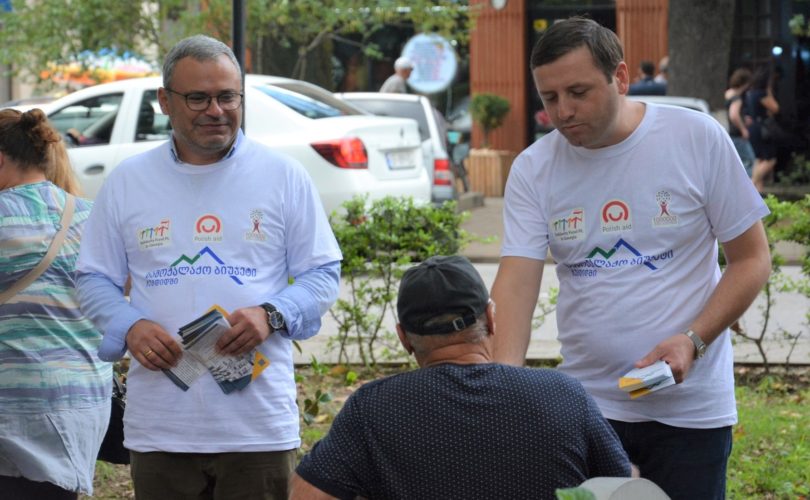 In the light of the signing (2014) and the ratification (2016) of the Association Agreement with the European Union, Georgia has entered the path of large-scale reforms leading towards gradual integration of selected affairs with the EU. The self-government reform (2014) and the changes to the Law on local authority (2017) have initiated a process of decentralisation of power in Georgia, which will result in larger independence of self-governments — also in regards to budgeting. This creates a formal basis for the participation of the residents in self-government affairs and in deciding on matters that are important to local communities.
Even though the information on municipalities’ budgets is published by the central authorities of Georgia, the citizens have very limited possibilities to engage in the decision-making process. The implementation of participatory budgeting, whose mechanism allows the residents to plan expenditures or decide on the realisation of projects, thus becoming involved in the investment process, is a chance to improve this situation. Participatory budgeting is funded from a section of the budget dedicated for this purpose by the authorities of the municipality.
The project “Participatory budgeting (PB) as a tool for engaging residents in the affairs of the self-government and the professionalisation of the personnel involved in participatory activities” follows up on the activities carried out by the Other Space Foundation (2015-2017), and subsequently by the Solidarity Fund PL within the framework of projects funded by the Polish Aid developmental cooperation programme.

Solidarity Fund PL Representative Office in Georgia implemented the project titled “Participatory budgeting (PB) as a tool for engaging residents in the affairs of the self-government and the professionalisation of the personnel involved in participatory activities” in six Georgian local government bodies (municipalities): Mestia, Signagi, Zugdidi, Gori, Tskaltubo, and Ozurgeti.
Project activities covered:

1. Development and implementation of a three-module training process on PB that included in-the-field traineeships and a final exam for 15 participants from all across Georgia.
2. Comprehensive support throughout the entire PB project cycle in the municipalities of Mestia, Zugdidi, Signagi, and partially Tskaltubo, which covered, among other things, planning and selecting projects for implementation.
3. Reviewing the process of public procurement in Georgia and carrying out a pilot aimed at engaging residents in the realisation of some of the projects, which had been chosen for implementation in the previous editions of PB.
4. Establishing an interinstitutional consortium of international and Georgian organisations and institutions with the purpose of promoting PB standards through creation of a certification scheme.

The project also facilitated collaboration with international experts on participation and local experts on spatial planning, which paved the way for 42 actions across various regions that enabled the implementation of all the components of the project.

Actions included:
• organising training sessions at the Academy of Participation;
• spatial planning meetings in six supported municipalities;
• trainings and workshops dedicated to specific PB stages held in the regions;
• consulting on the information campaign;
• off-site consulting by the mentors;
• support for internal PB evaluation processes;
• analysis of the process of public procurement in Georgia;
• meetings with experts on engaging residents in the investment process;
• meetings dedicated to PB standards;
• meetings of the interinstitutional certification consortium.
These actions created opportunities that allowed 77 persons to gain new knowledge.

The project:
• made it possible to create an Academy of Participation training programme (42 hours of theoretical training and 171 hours of in-the-field traineeships reflected in 291 pages of traineeships logs);
• enabled 14 Academy of Participation graduates to receive certificates confirming their PB-related skills;
• contributed to maintaining PB standards in all four municipalities (Mestia, Signagi, Zugdidi, Tskaltubo). The municipalities also received full professional and financial support in regards to the implementation of the PB cycle throughout the first year of the project;
• facilitated the development of a model for engaging residents in the processes of public procurement and project-related investments;
• established an interinstitutional consortium that elaborated a system for increasing the quality of PB processes that were implemented by self-government bodies in accordance with the PB standards;
• allowed 8 municipalities to receive certificates confirming their ability to handle PB processes in accordance with the PB standards.